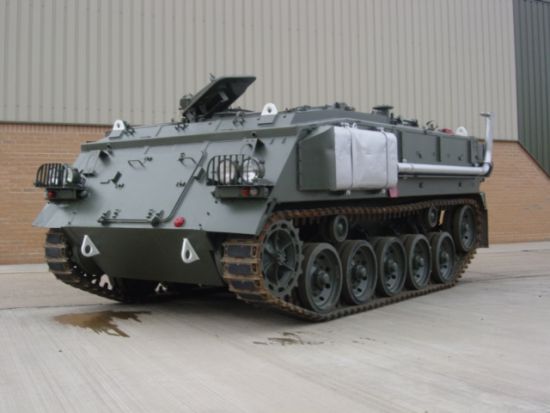 The FV432 is the armoured personnel carrier variant of the British Army`s FV430 series of armoured fighting vehicles. Since its introduction in the 1960s it has been the most common variant, being used for transporting infantry on the battlefield. In the 1980s, almost 2,500 vehicles were in use, with around 1,500 now remaining in operation - mostly in supporting arms rather than front-line infantry service.

Although the FV432 Series was to have been phased out of service in favour of newer vehicles such as the Warrior and the CVR(T) series, they are now gradually being upgraded to extend their service through into the next decade.

In light of the army`s need for additional armoured vehicles in the Afghan and Iraqi theatres, the Ministry of Defence announced in August 2006 that an extra 70 vehicles would be upgraded by BAE Systems in addition to 54 already ordered as part of their force protection initiative. The improvements take the form of an engine upgrade, new steering unit, and new braking system as well as improving armour protection to a level similar to that of the Warrior. The concept is that these FV430s will free up the Warrior vehicles for reserve firepower status and/or rotation out of theatre. The Updated version is to be called the "Bulldog".

The FV432 was designed to be the armoured personnel carrier in the FV430 series. Production started in 1962 by GKN Sankey and ended in 1971 giving approximately three thousand vehicles.

The FV432 is an all steel construction. The FV432 chassis is a conventional tracked design with the engine at the front and the driving position to the right. Directly behind the driver position is the vehicle commander`s hatch. There is a large split-hatch round opening in the passenger compartment roof and a side-hinged door in the rear for loading and unloading. In common with such an old design there are no firing ports for the troops carried - British Army doctrine has always been to dismount from vehicles to fight. The passenger compartment has five seats either side - these fold up to provide a flat cargo space.

An NBC system on the right side of the hull gives fresh air for the troops. Wading screens and a trim vane were fitted as standard and an extension went on the exhaust pipe. The vehicle has a water speed of about 6 km/h when converted for swimming and was propelled by its tracks. Most of these vehicles now have had their amphibious capability removed.

The FV432 with infantry regiments is equipped with a pintle-mounted L7 GPMG (if not fitted with the Peak Engineering turret). Vehicles with the Royal Artillery, Royal Engineers and Royal Signals were originally fitted with the L4A4 variant of the Bren light machine gun, they now also use the GPMG. When equipped with the GPMG, the vehicle carries 1,600 rounds of belted 7.62mm ammunition. When carrying the Bren LMG, the vehicle has 1,400 rounds of 7.62mm ammunition (50 magazines, each holding 28 rounds). There are two three-barrel smoke dischargers at the front.

A number of surplus vehicles were sold to the Indian Army after being withdrawn from British service. Seventeen others have since been converted by a company in Leicestershire for use in Tank Paintball.[1]

Others are in private hands and can be driven in South Northamptonshire or hired for promotional purposes.

In service with UK, India.