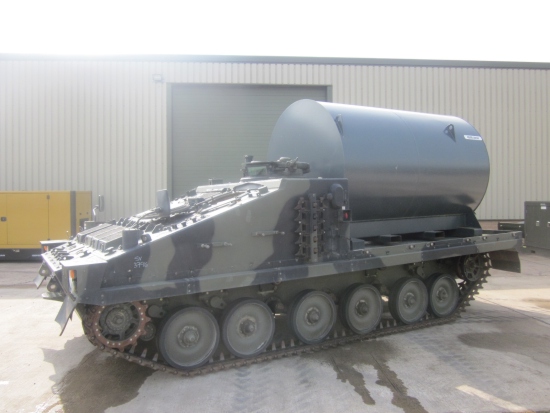 These vehicles are ideal for mounting a drill rig, fuel tanks, service equipment, winch etc for in extreme conditions.

The vehicle hull is manufactured from aluminium armour which protects the crew from small arms fire and shell splinters. Vehicle accomodates 2 personnel in the hull plus driver. Both compartments are fitted with air conditioning.
These vehicles are latest vehicles to be released from the MoD, they are 1999 year.


In 1980, the now BAE Systems Land Systems purchased the manufacturing and marketing rights of the FV4333 from the British Ministry of Defence.

The vehicle was originally designed by the then Military Vehicles and Engineering Establishment (which no longer exists as such) and the first prototype made a brief appearance at the mobility demonstration at Bovington during the 1978 British Army Equipment Exhibition. In June 1981, the now BAE Systems Land Systems (at that time Alvis) announced that its development of the FV4333 had been designated Stormer.

The Stormer took advantage of the existing technology of the now BAE Systems Land Systems Scorpion CVR(T) family and many of the proven components have been used. The transmission is the same as on the CVR(T) but with a modified input gear train (with the designation changed from TN15 to T300) and the suspension uses CVR(T) components with wheel stations increased either side to six per side.

The hull of the Stormer is wider than the CVR(T) and its original petrol engine was replaced by a Cummins or Perkins Engines Company turbocharged diesel engine.

Late in 1981, Malaysia placed an order for 26 Scorpion 90 vehicles and 25 Stormer APCs, production of which commenced in 1982 with first deliveries made in 1983. Of the Stormer APCs, 12 vehicles are fitted with Thales Land & Joint Systems FVT900 one-person turrets armed with a 20 mm Oerlikon Contraves cannon and a 7.62 mm machine gun and the remainder with a now Rheinmetall Landsysteme TH-1 turret armed with twin 7.62 mm machine guns.

Further development, especially in the area of Reliability, Availability, Maintainability and Durability (RAM-D), resulted in the second-generation Stormer. This vehicle, following a competition, was selected as the platform for the Thales Air Defence UK Starstreak High-Velocity Missile (HVM) system ordered by the British Army.

In 1995, the company completed the last of 145 Stormers for this contract of these, 135 were for the Starstreak High-Velocity Missile (HVM) system and the remaining 10 for the Troop Reconnaissance Vehicle (TRV) requirement.

For all the specialised roles previously undertaken by members of the Scorpion family, for example armoured personnel carrier (Spartan), ambulance (Samaritan), command post vehicle (Sultan) and recovery vehicle (Samson), the Stormer chassis is now the preferred choice as not only is it a later development but also has a significant increase in internal volume over that of the older versions.

All the Indonesian Scorpion 90s and Stormer vehicles (with the exception of the recovery and flatbed versions) are fully amphibious and are propelled in the water by their tracks, or using a sprocket-mounted propulsion system.

In addition to the basic armoured personnel carrier version of the Stormer, Indonesia ordered a complete family of variants including command post vehicle, ambulance, recovery, logistic carrier and bridgelayer. The last two vehicles are flatbeds with the bridgelayer carrying a launcher and a Class 30 scissors-type bridge which when opened out is 15 m long.

The first Stormer command post vehicles were shipped to Indonesia in the summer of 1995, within six months of the production order being placed. Final deliveries were made in 1997.

Late in 1996, the company won a second contract from Indonesia for the supply of approximately 50 members of the Scorpion family of light tracked armoured vehicles.

The Indonesian Scorpion/Stormer order was in three phases of which the first two have now been ordered and delivered.

Production of the Stomer family has been completed and the vehicle is no longer being marketed by BAE Systems Land Systems.