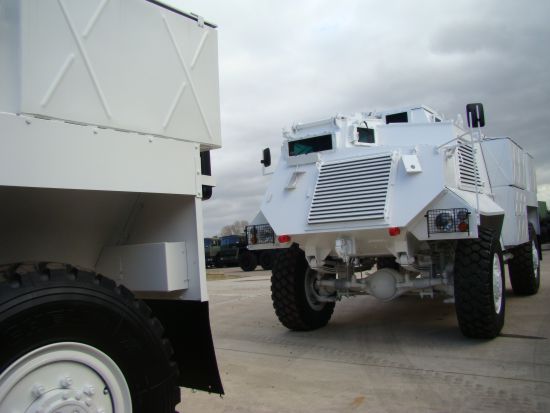 
Saxon AT-105 APC is a 4x4 ex military vehicle offering 2-wheel and 4-wheel drive in
high and low ratios for on-and-off road use in urban to battlefield environments.
The best vehicle Riot Control for a Police and SWAT.

Easy modification to any Saxon vehicle:

SAXON can be fitted with gun ports, pintle mounted or turret mounted machine guns,
and a variety of vehicle launched anti-tank and air defence missiles,
to provide ease of access to engine, gearbox and transfer gearbox to facilitate rapid inspection and maintenance,
from the outset to be a family of vehicles, its mobility, capacity and protection making it ideally suited for many roles.

Saxon is air-transportable in C130 Hercules and other transport aircraft,
room for driver, commander and 8-10 personnel and stowage space for combat supplies, anti-tank weapons, and ammunition.
Its large interior capacity makes it ideal for command, ambulance and other volume demanding roles,

SAXON`S protection is supeior even to many tracked armoured vehicles, providing both crew protection against 5,56mm and 7.62mm ball and AP, anti-tank mines up to 9 Kg, and 155mm HE air bursts.


(1) British Army Saxon vehicles have a fixed observation cupola for the commander with socket in each corner for a 7.62mm GPMG DISA mount.
Some vehicles deployed to Bosnia were fitted with a one-man turret armed with a 7.62mm MG, taken from a FV432.
(2) Hutchinson run-flat cores fitted in British Army vehicles.


Saxon is a wheeled Armoured Personnel Carrier (APC) capable of travelling across rough terrain and fording water obstacles up to 90cm depth. The vehicle has excellent battlefield mobility and is extremely versatile.

The Saxon was manufactured by GKN Defence and the first units for the British Army were delivered in late 1983.

The vehicle, which can be best described as a battlefield taxi, is designed around truck parts and does not require the same level of maintenance of track and running gear normally associated with APC/AIFVs.

Essentially a mine-proof lorry, rather than an armoured personnel carrier, the vehicle has been used very successfully by Mechanised Battalions serving with the UN in Bosnia and is in operational service with British forces in both Iraq and Afghanistan.

The Saxon Internal Security vehicle for service in counter insurgency operations has a Cummins BT 5.1 engine, instead of the Bedford 6-cylinder installed on the APC version and other enhancements, such as roof-mounted searchlights, improved armour, a barricade removal device and an anti-wire device.This comes in two versions, a troop-carrier which carries ten men and an ambulance which carries two stretcher cases.